We’re there guys. We did it. We’ve reached the future. That’s my best conclusion when I can say that I successfully 3D printed a chess set.

Or maybe it’s because the chess set features a certain time-traveling alien’s friends and nemeses.

That’s right. For my brother’s birthday, I 3D printed him a Doctor Who chess set.

As seen on the computer screen in the photo below, I decided to print each set of pieces all at once. I thought it would be faster than having to heat up the printer and reset the glass each time. What I didn’t think about was how much more room there is for error when printing so many parts at once. 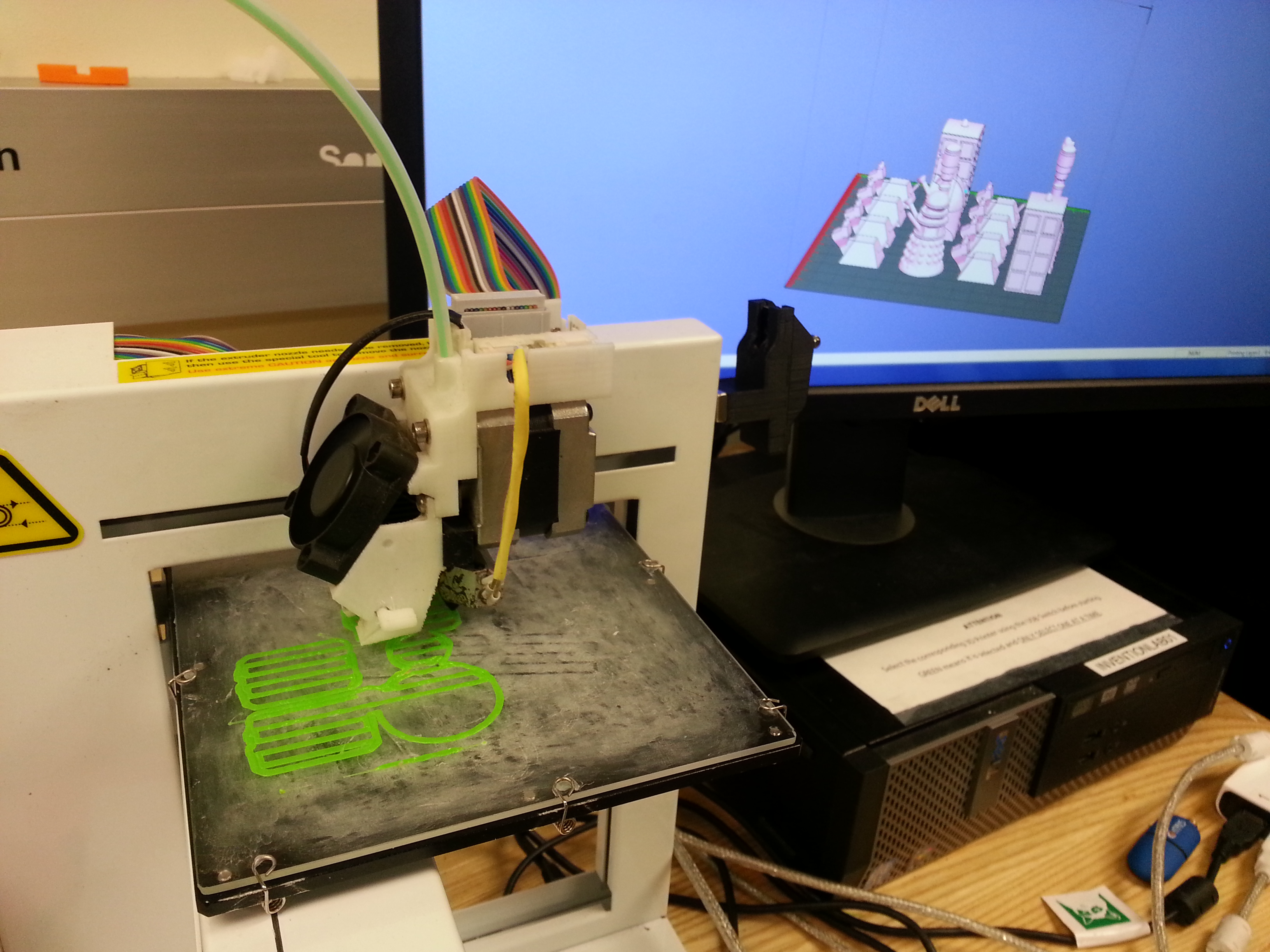 For example, when I printed Tanya’s turtle, after the first messed-up print I was going to try printing two at a time to save time and have more turtles. But the lab manager stopped me, noting that it would both take more time and make more possibility for something to go wrong (because there would be more to print).

Looking back, 16 intricate pieces at once is a lot more than two turtles.

Somehow, I started printing the first set (it was blue) and everything seemed to be going okay. 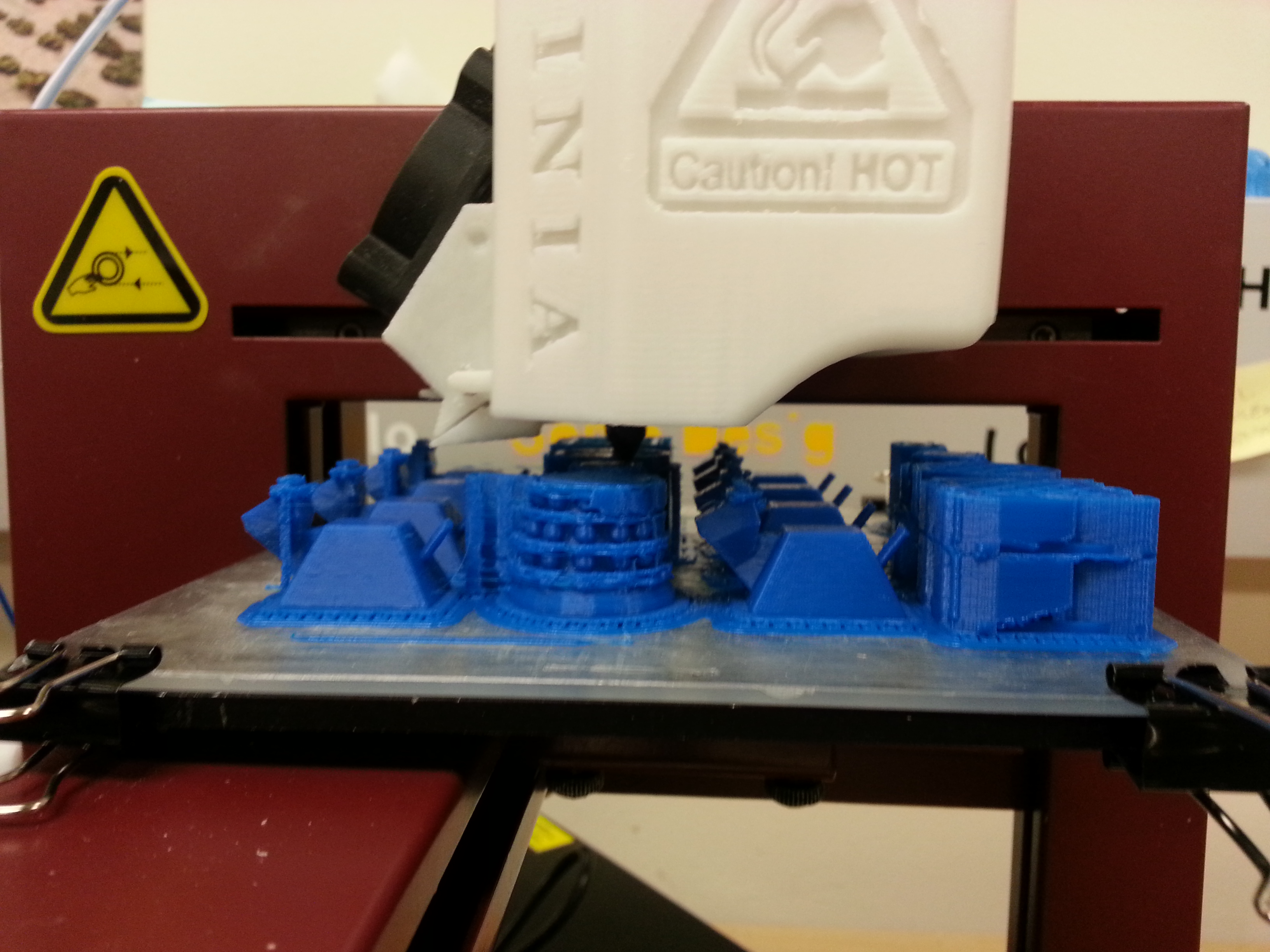 It took over ten hours to print that first blue set of chess pieces. That entire day I worked on my adVenture project in the Invention Lab, so around every 30 minutes I’d check up on my print. Smooth as ever.

But my second batch (the green set) would have to be done overnight. Over eight hours of printing and the Lab was closing for the evening. I saw someone else’s print earlier in the semester after they’d left it for the night. It looked like a woven basket that had been unraveled from each layer. Basically, a fail if there ever was one.

And yet, that’s what they were asking me to do! I hoped to be let in early in the morning to check in with it and take my print off the machine when it finished, but it was a no-go. I’d just have to hope that the Doctor was one my side.

I rushed in the next morning to find… 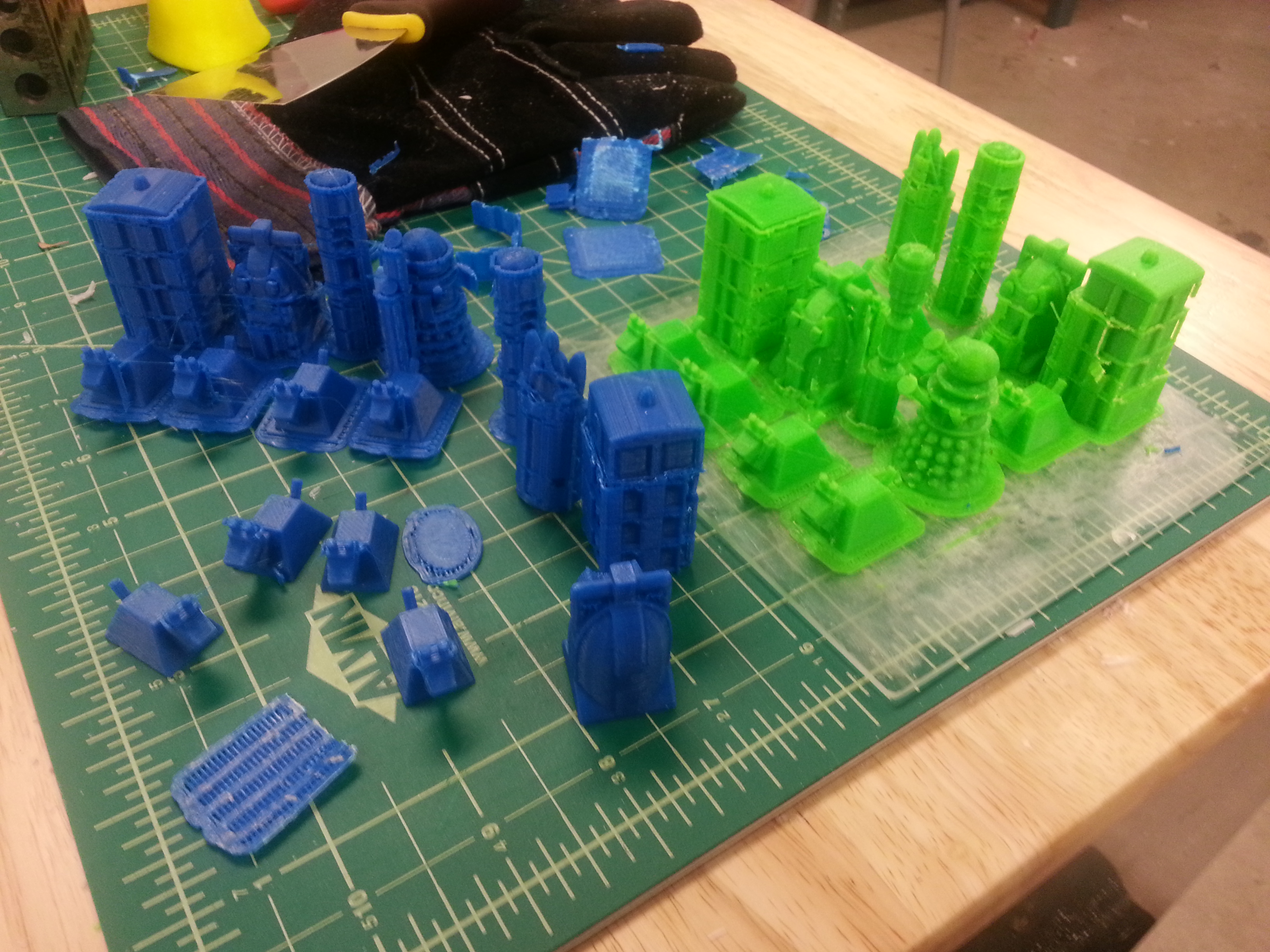 Success! At the start, I couldn’t print one little green turtle easily, but now I managed an entire Doctor Who themed chess set. I had indeed mastered the art of the 3D print.

The lab manager had moved my prints off of the machines and started taking off the scaffolding (extra plastic that is very thin, easily removed, and and keeps the intricate parts from sliding). Funnily enough, he also informed me that the glass I printed the green set on had cracked — either while sitting overnight or when he tried to scrape it off, I can’t remember. He had forgotten that cracking could happen if a print sat too long on a glass plate. The plastic bonded too much with the plate because I didn’t scrape it off right away. 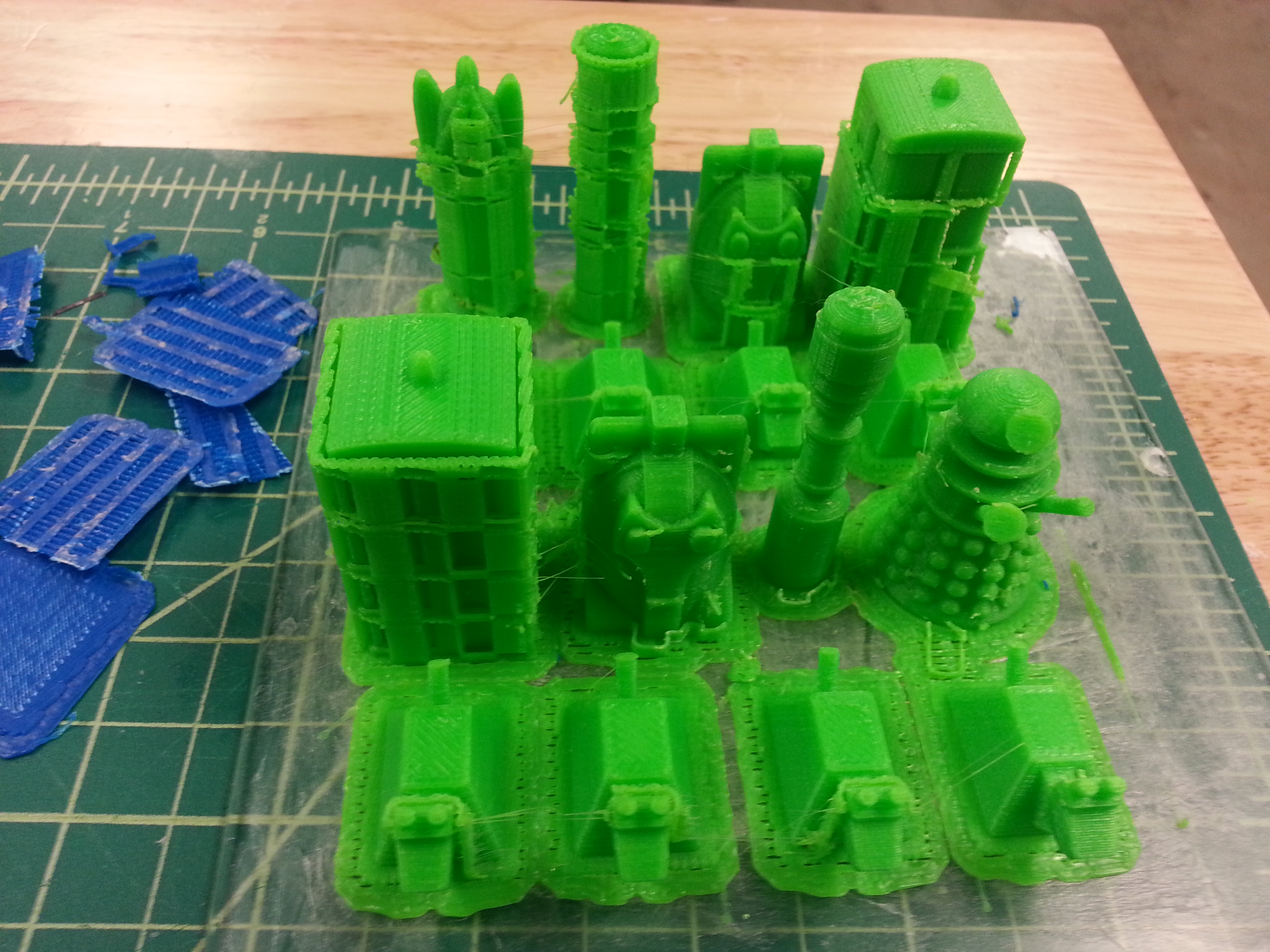 I think you can see some of the crack near the Dalek in the second row. It actually went through the entire plate.

Anyway, when I finally had time to take the green pieces off the plate (later that afternoon, as we had final project presentations this day!), it was a struggle to keep my hands from being cut by the broken glass. But I managed, and learned a valuable lesson for the future: If I want to come in at 5AM to finish a print, find a way!

And now for the pièce de résistance: 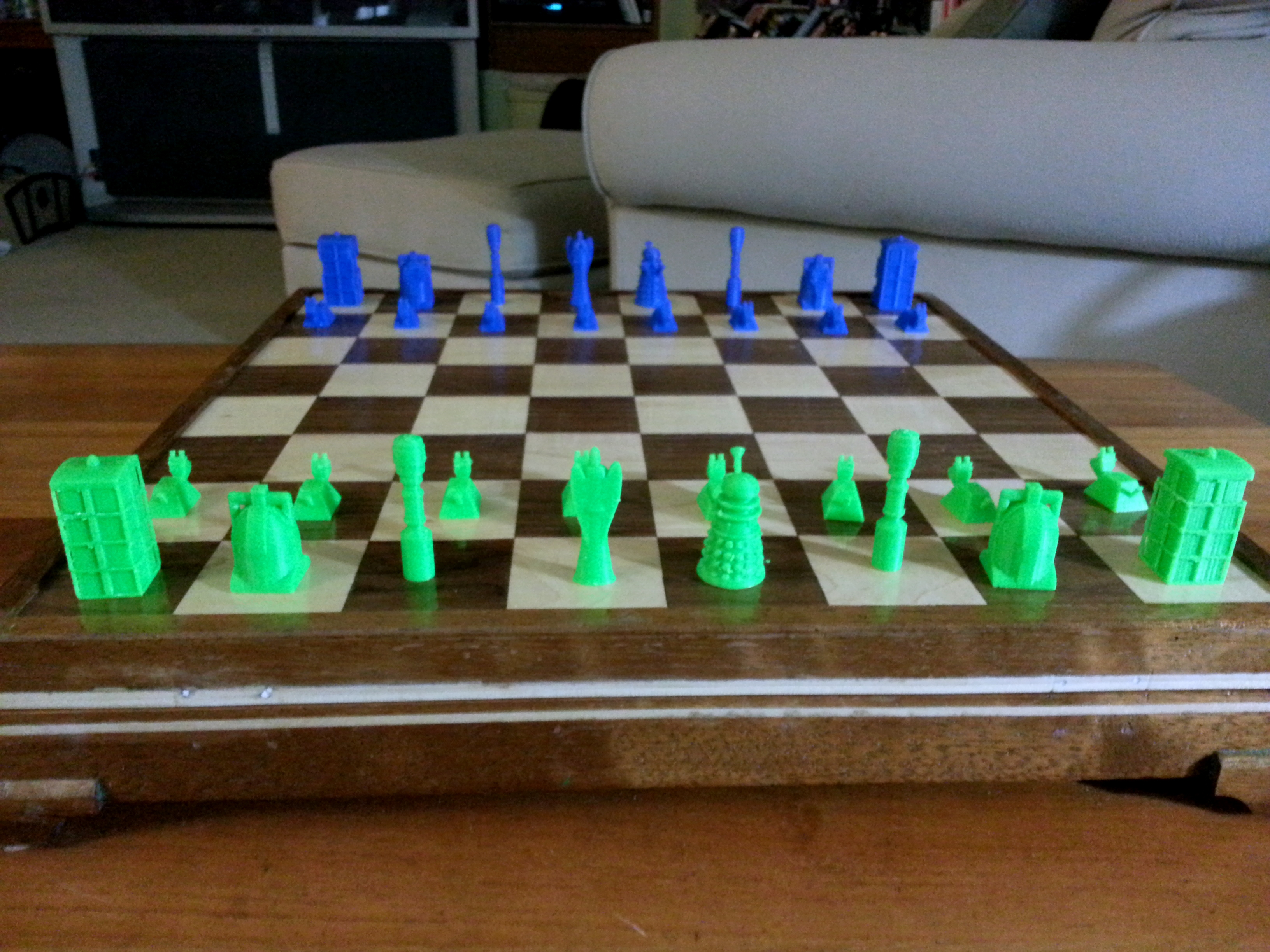 My grandpa is an expert woodworker, and he made this chessboard for my brother’s birthday. It was as if our presents were meant to go together.

Can you tell what characters all the pieces are? 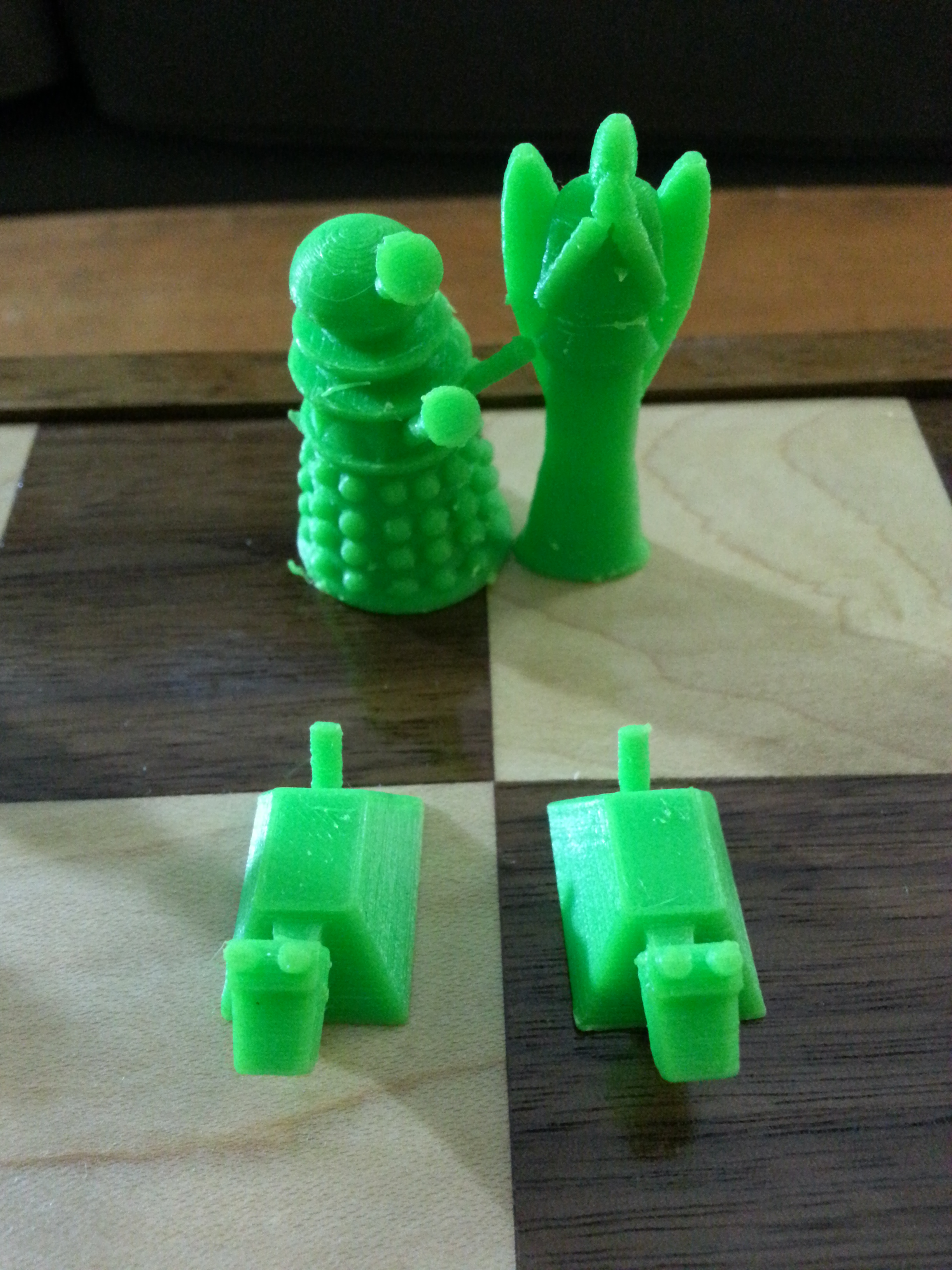 Here’s the king and queen, a Dalek and Weeping Angel, respectively. Accompanying them are their loyal pawns, the K-9s. 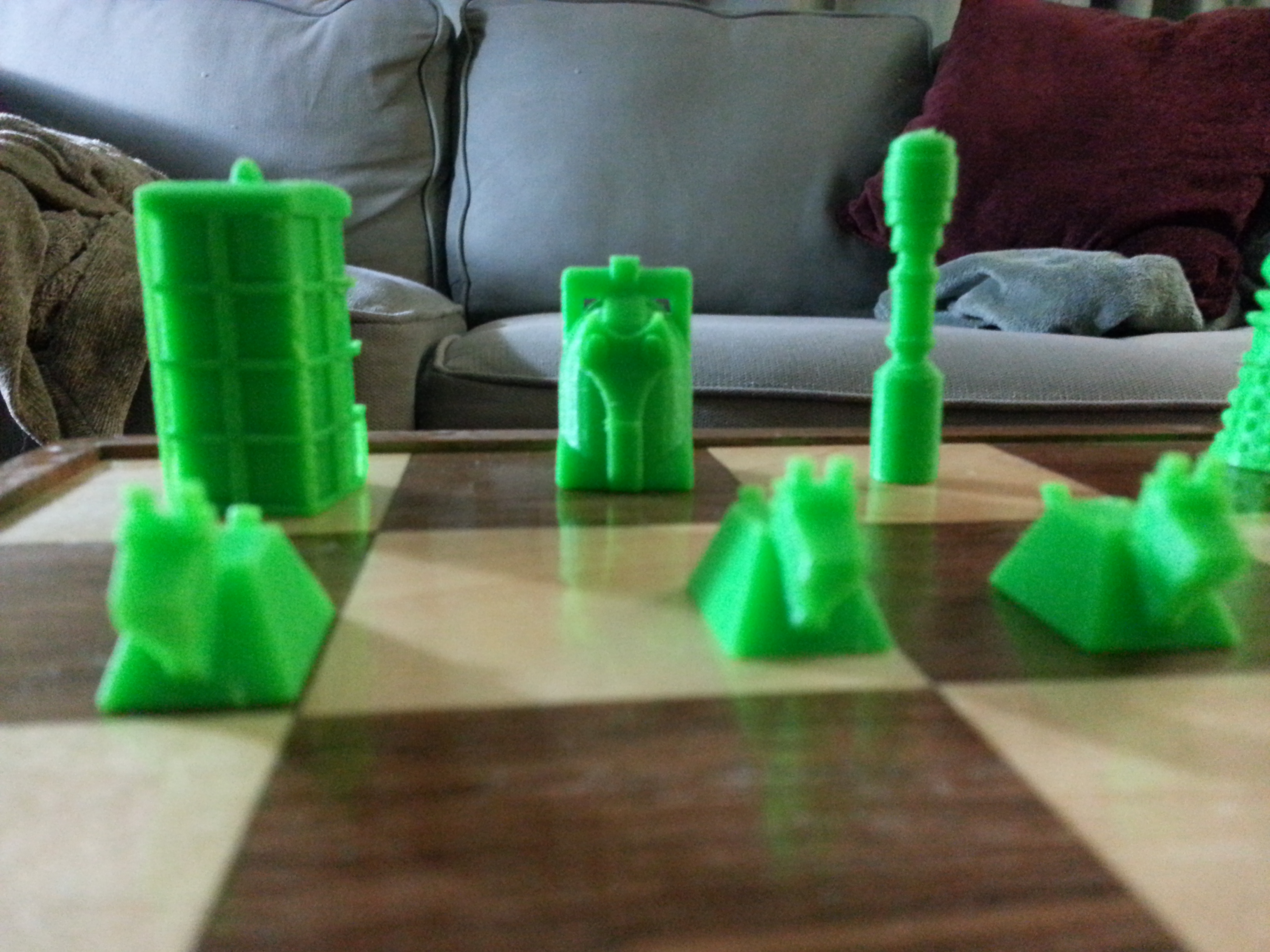 Here’s the rest of the lineup — TARDIS as rook, Cyberman as knight, and Sonic Screwdriver as bishop.

And finally, one last thing to note: 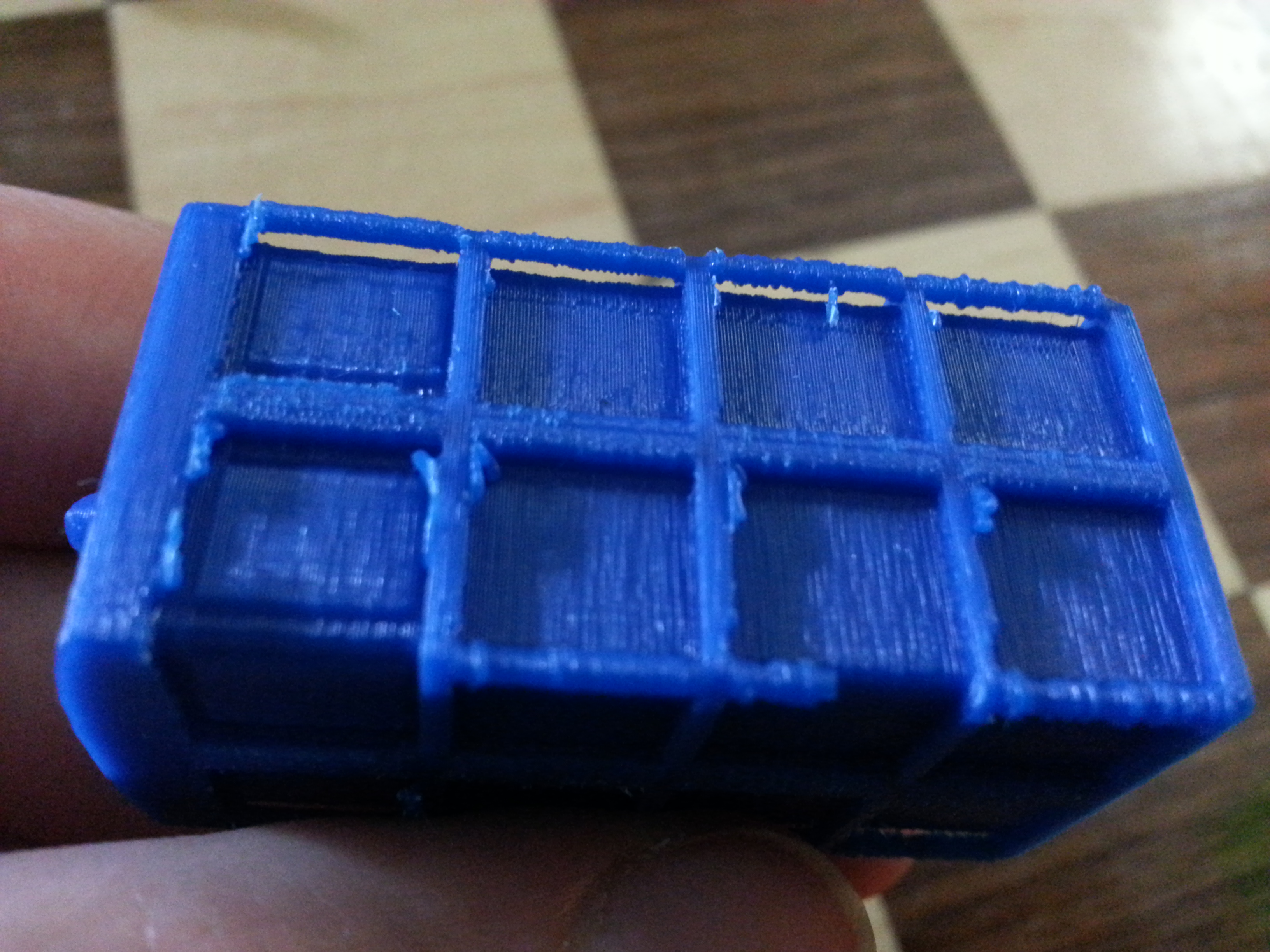 You can see on the sides of the TARDIS that the plastic making up the edges of the windows isn’t attached to the solid part of the side. This is not an error in printing — it’s more to do with judgment of the creator of the model itself. These miniscule gaps were left in for some kind of purpose, but because of this, it was especially hard to pull off the loose plastic scaffolding. Unfortunately, parts of the sides on all four of the TARDIS pieces broke off while I tried to delicately peel off the scaffolding.

Note to 3D modelers: please be aware of how easy your model will be to handle once it is printed!

So that’s the story of the Doctor Who chess set and my grand foray into 3D printing. Now it’s time for me to level up and start designing models on my own. 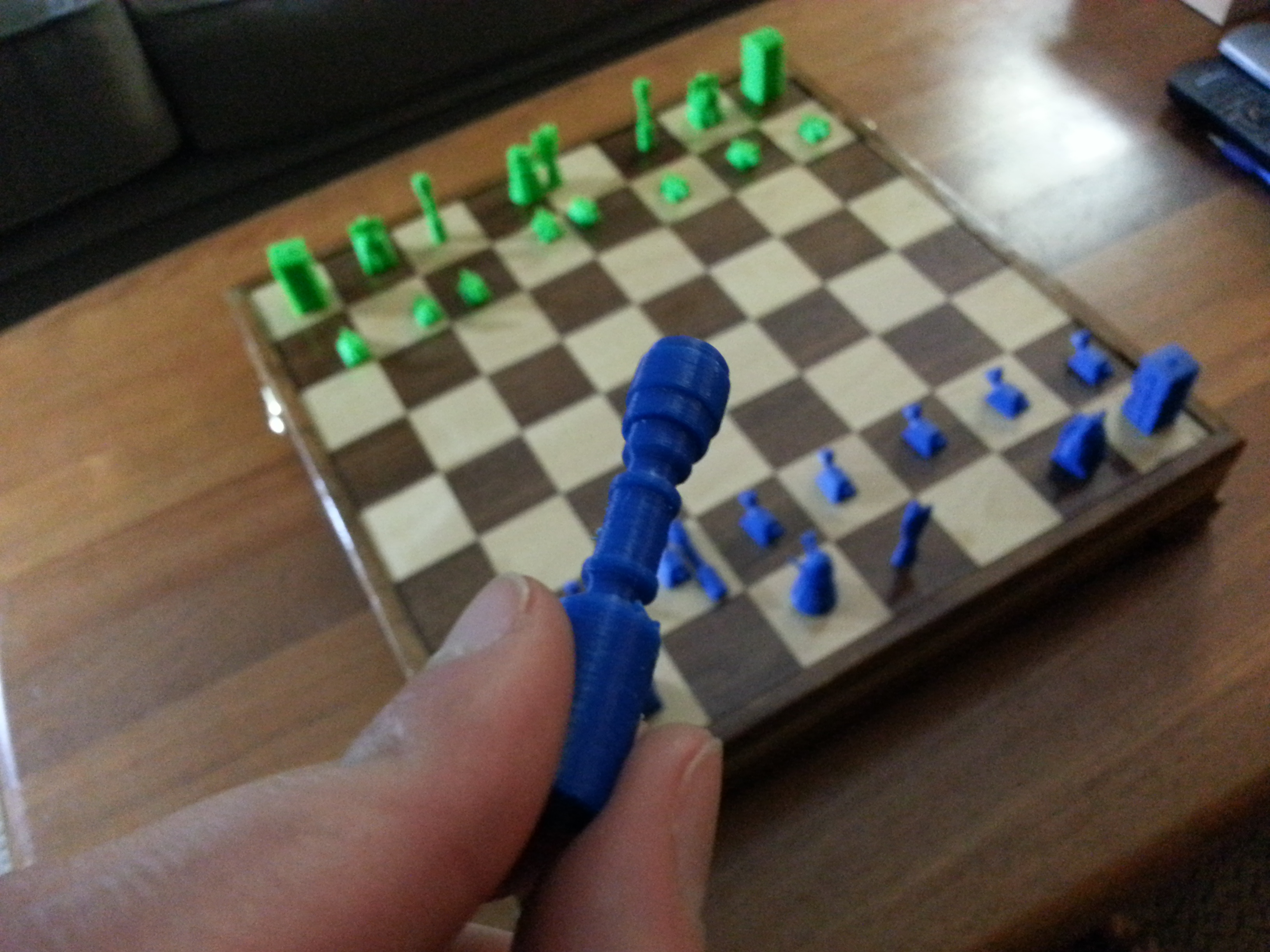 Why won’t this darn thing work on wood?