Cars Land opened in Disney California Adventure on June 15, 2012. My friend Ali (a member of D23) had received a special offer to visit the brand new area based on the hit Pixar movie on June 10th…pre-opening day.

Being the best friend ever, she took me with her. 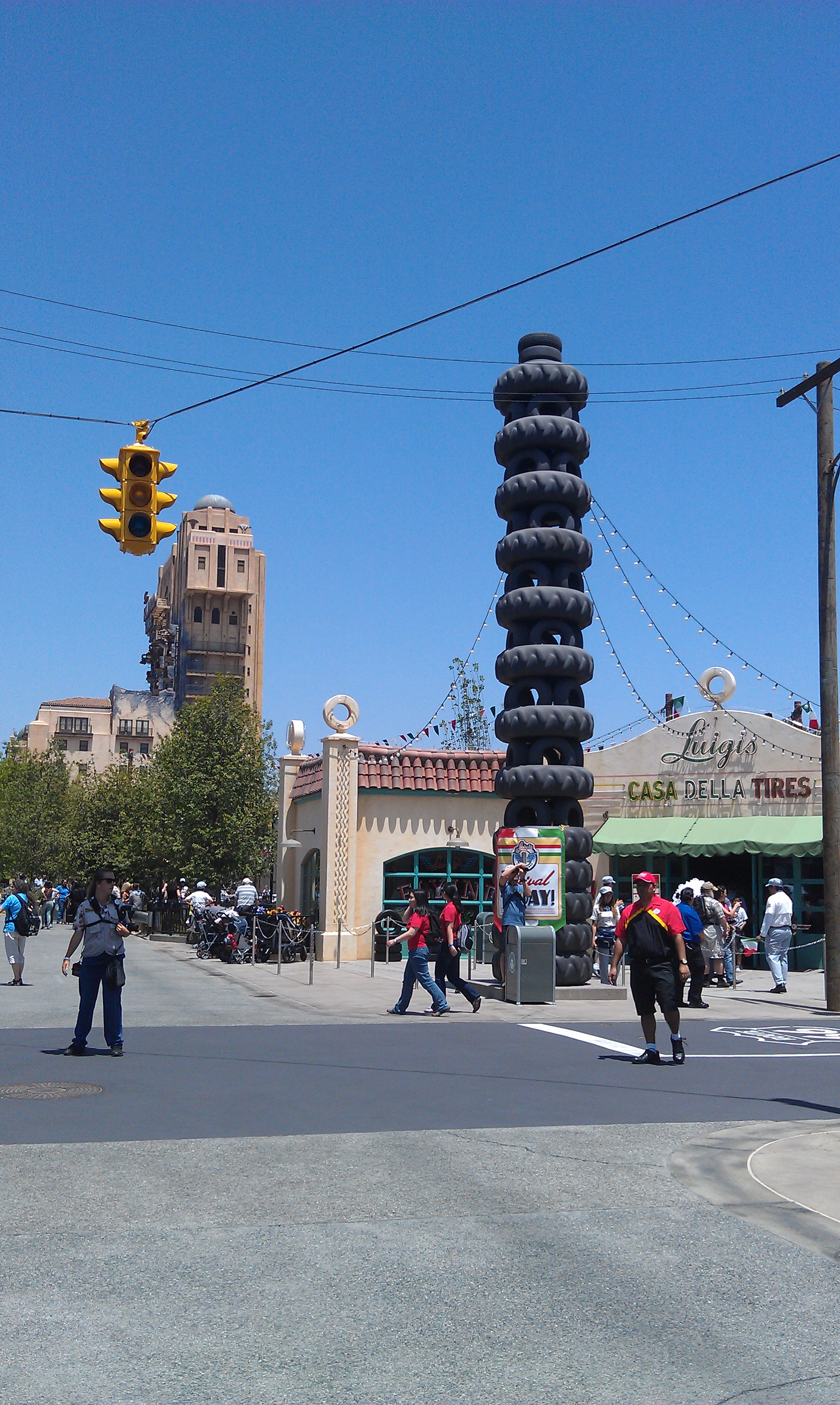 When I stepped into Cars Land, I stepped into the movie. You’re welcomed by golden-brown desert cliffs, the very same that encircle the sleepy town of Radiator Springs in the film. And Radiator Springs itself was magical - exact to the movie, complete with shops such as Luigi’s Casa Della Tires and even the Cozy Cone (the motel that Lightning McQueen stayed at while he couldn’t leave the town).

Cars is actually one of my favorite Pixar movies, so much so that I even bought the soundtrack around the time the movie came out. That movie introduced me to “Route 66” and “Life is a Highway”. I love the details in the movie, from the Volkswagen Beetles that are actual beetles to the individuality put into each of the cars. 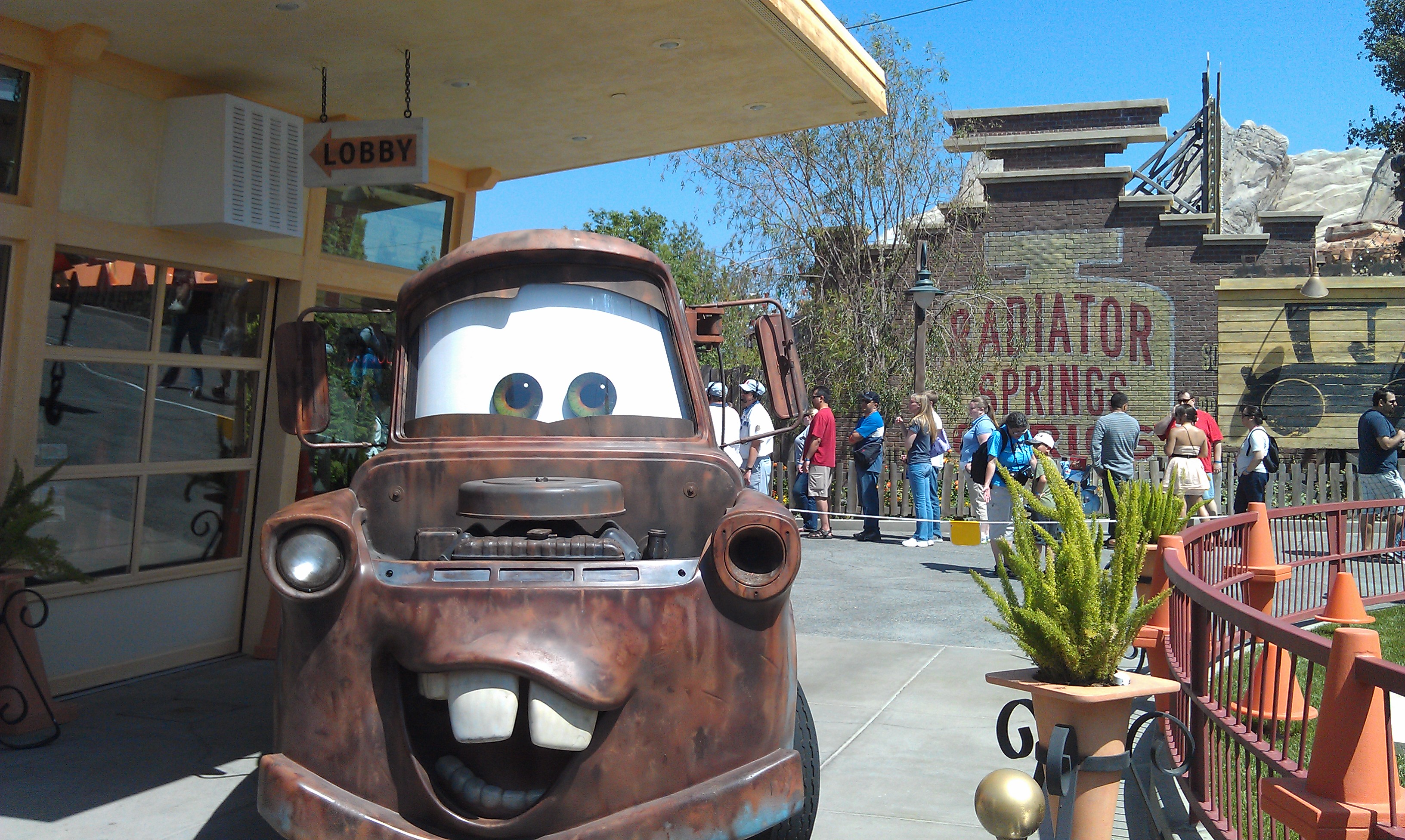 Mater - perhaps the car with the most character

I didn’t want to leave Cars Land - it was too perfect, too magical. Only the people walking around reminded me that I wasn’t in the alternate universe where cars existed instead of humans. The rides were fun (especially the one where you go through a bunch of scenes in the movie) - but I really just enjoyed taking everything in, slow crusing, people-watching and car-watching in the moment.

It was the same for me when I used to visit Tom Sawyer’s Island in Disneyland. The Americana music pumped in through the speakers and the rocking chairs on the deck of a mini wooden house calmed me, left me feeling that I was back in late-nineteenth century America. I wouldn’t even want to leave the island to explore the rest of Disneyland - if I’d had my way, I would have brought a book with me and sat on that deck, reading until the sun went down and the Island closed due to some Disneyland policy or another.

Still, the pre-opening festivities came to and end, and it was time to check out more of California Adventure. Ali and I headed over to Paradise Pier. 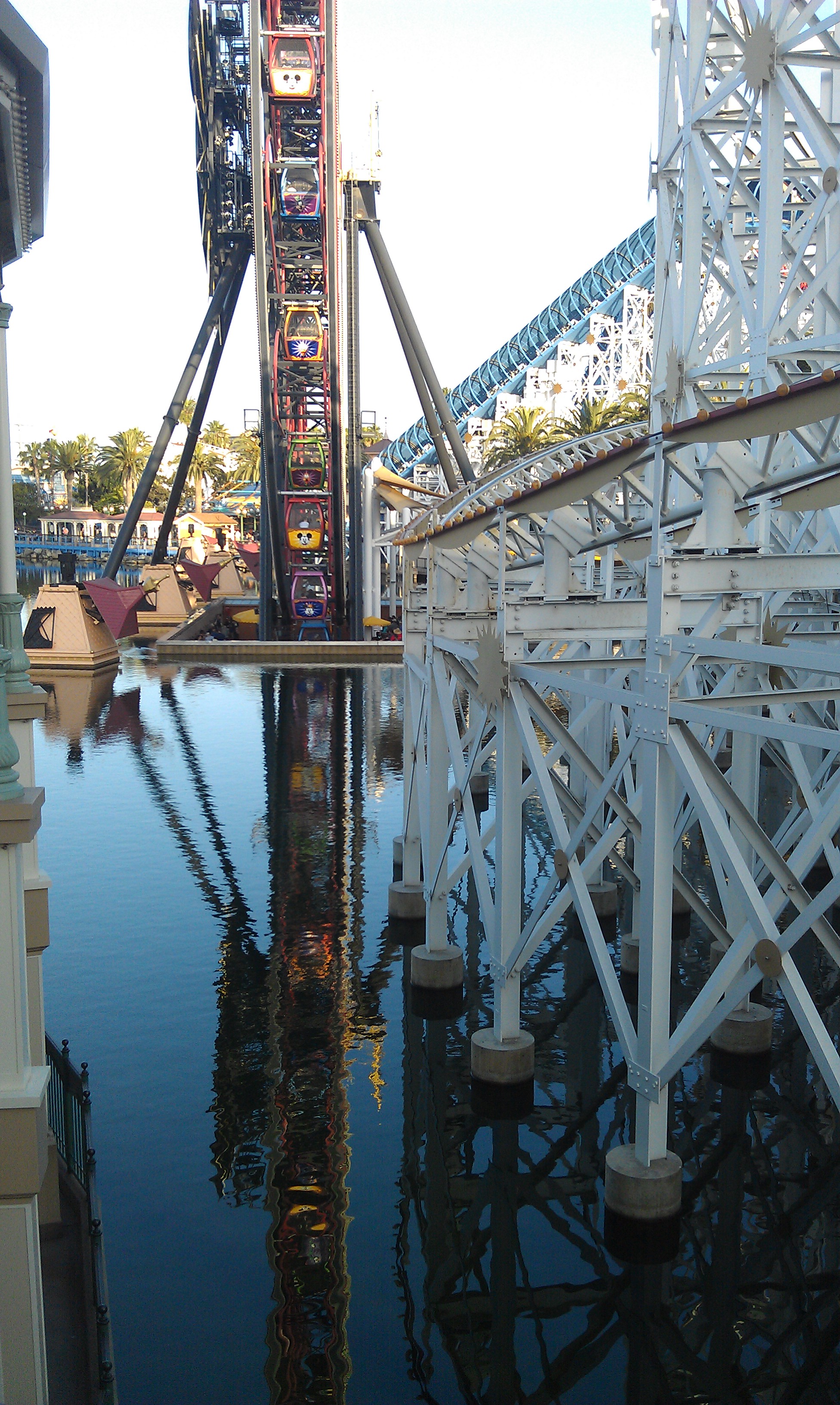 The Ferris Wheel in front of California Screamin’

We decided to stay around the Pier, going on less crowded rides and watching as day shifted to night. 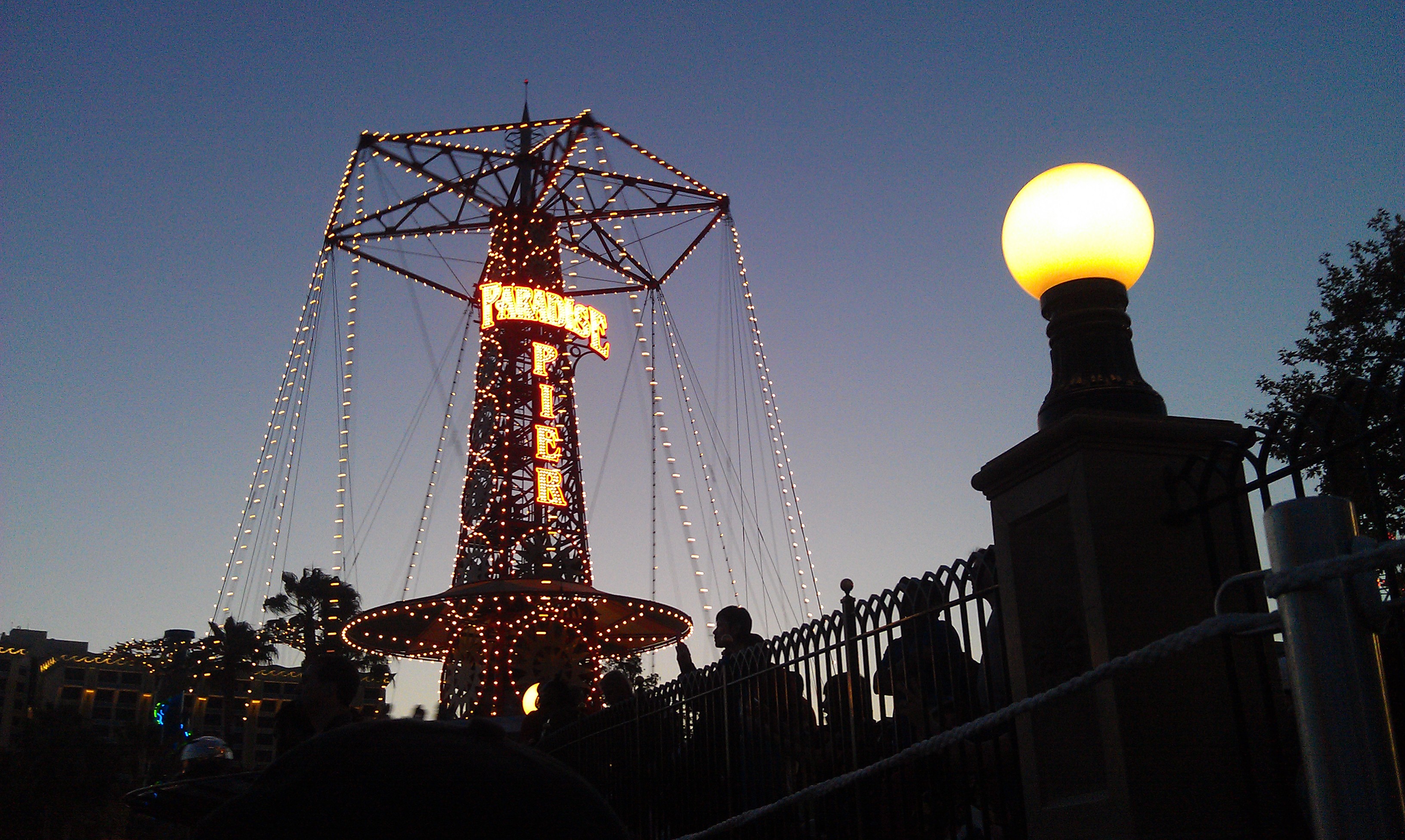 I told Ali I’d never seen World of Color, which is supposed to be one of the most breathtaking shows of the Disney Parks: Think water + color + scenes from classic Disney movies reflected off of sheets of water in midair. So of course, she demanded to remedy my situation at once. Since it was one of those slightly-below-sweltering summer days, we were wearing shorts and only carrying light jackets. Nothing to protect us from the elements, and definitely nothing to protect us from enough water to make me think we were front row at a Shamu show.

But we braved it all anyway, sat as close as possible to the action on the water, and soaked ourselves to the skin as we took in the dazzling view. 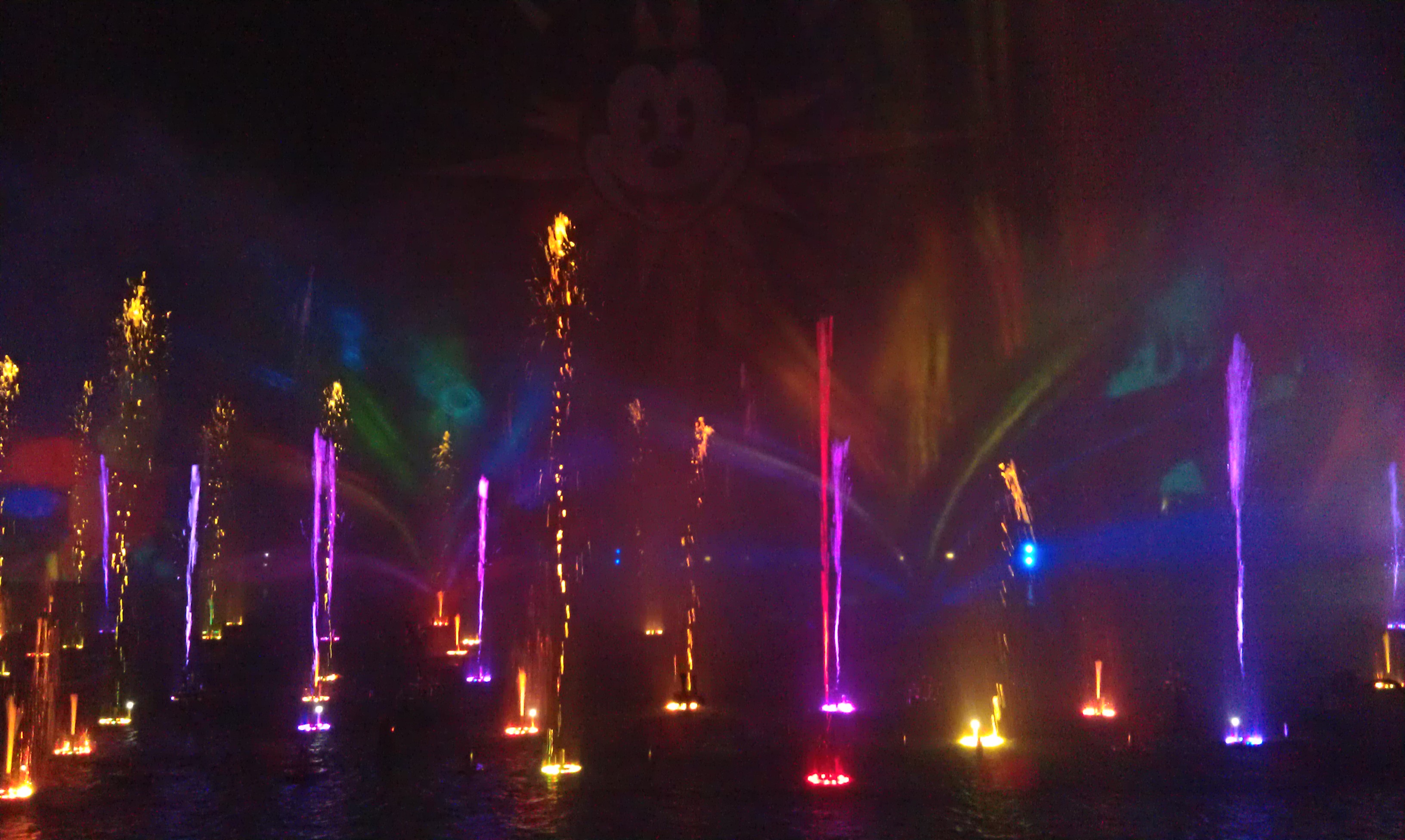 We were cold, and tired on our feet, but it was worth it. Being surrounded by so much color and so much motion was one of the coolest experiences, and the crowd became one as we ooh’d and ahh’d and applauded together.

To top off the night, and due to interesting circumstances upon our arrival that morning, Ali and I were lucky enough to make the short hop over to Disneyland and eat at the Blue Bayou - you know, that fancy restaurant that just happens to be inside the Pirates of The Caribbean Ride. Dinner was expensive but we didn’t have to wait for a reservation, I’d never eaten there before, and it made sense to top off the day’s experience dining in style.

Because when you go from a land inhabited by cars to a world drenched in color, the only right thing to do is eat in a bayou overrun by pirates.