Warning: This post may have over-dramatic tendencies and be filled to the brim with my trademark humorous blend of wit and run-on sentences.

I am an avid supporter of OneNote and its magical notetaking capabilities, as seen in my semi-recent article in berkeleyByte about essential Mac apps.

I was elated when OneNote was finally released on the Mac App Store just this past March (March 17th to be exact, as I’ll always remember that glorious date). Since I started using the software five years ago, I didn’t think I could live without it. It had just become that integral to my routine.

But the release didn’t come without problems. Many parts of the Windows version that I desperately needed were missing, and it overshadowed the good for me. I resorted to continued use of Outline and hoped the issues could be sorted out.

I even wrote up my concerns through some sort of feeback system on the OneNote website, though I was sure they fell on deaf ears because I did not even receive a pop-up confirmation on the page itself saying that my comments had sent. Scandal!

Yes, I realize that the software had literally just been released for the first time for the Mac, and C# and Objective-C are quite different programming languages, but that is beside the point.

Basically, all hope was lost.

And then, yesterday, as I slowly clicked on the notification that app updates were available, and gazed upon the amazing news, this chorus burst forth in my head. The newest version of OneNote has (most of) the updates I’ve been waiting for! And now I shall share my thoughts on them with you. 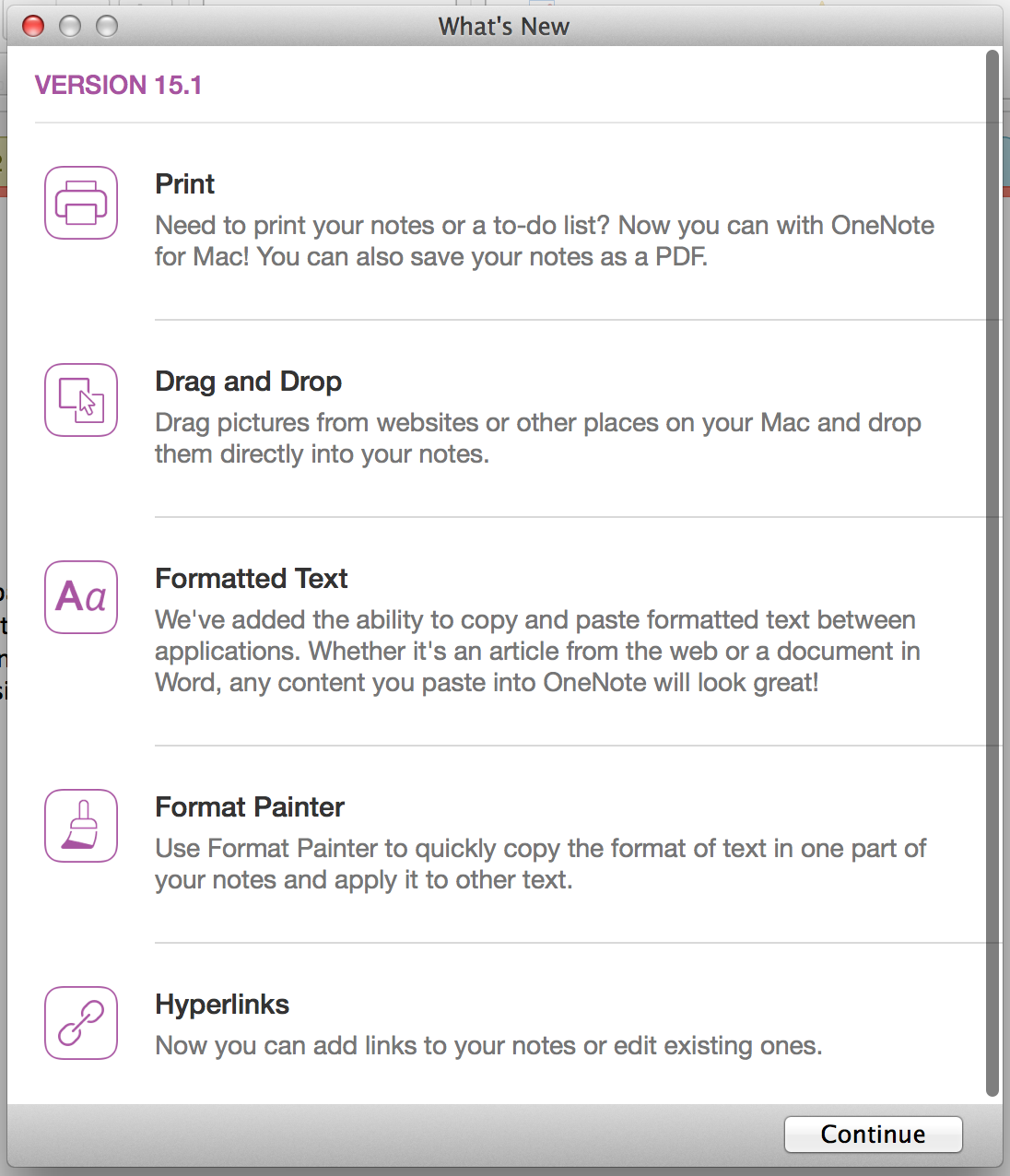 This was a must-have. Not specifically to print to hardcopy for me, but to make PDFs of my notes. Since I use OneNote for practically everything — because it’s a never-ending canvas of notetaking wonder — its page formatting does not fit on a simple document if I copy and paste everything in order to share it with others or the like.

Drag and drop capabilities were a huuuge thing missing from an app that had so much potential and such a rich history of functionality in its Widnows-counterpart. The only way I could add pictures before May 1st was by saving them to my computer and then uploading them to the notebook. Primitive! Now I am free to copy and paste from the web with ease!

For example: Said packing list from above? Well, I found a copy online, only the website created it as an image instead of text (which is just a whole ‘nother can of worms). So instead of typing each item up individually, as I would have had to endure on April 30th, I simply dragged the list into my notebook page. Voila! Instant satisfaction! Like buying Jamba Juice when you would have had to make a smoothie yourself (which would have taken so much longer).

This. THIS. This is biggest update that I needed. Imagine my delight at having my favorite computer software finally available on the computer I just committed myself to for at least the next three years, and then find to my dismay that anything I pasted in from online/other documents/etc would lose any and all formatting.

One of my biggest uses for OneNote was as an aggregator for guitar tabs and chords. I could paste them in from websites like Ultimate-Guitar and read them easily in their native Courier New. But that wasn’t possible when OneNote was released for Mac in March. Until this newest update, I had to stop playing guitar altogether because what was the point.

Even little things like having bolded words in notes I wanted to transfer from Outline would have to be done all over again by hand. Re-bolding? What is this, the age of the typewriter?

This update is probably what makes my heart sing with joy the most. Thank you, gods of Redmond, Washington, for talking some sense into the Microsoft OneNote team.

I am actually still trying to figure out when is a good time for me to use this. I don’t even know if this was a part of Windows OneNote. I’ll keep you updated on if I start to find this helpful.

Last, but certainly not least, they’ve finally included a way to create links in OneNote notebooks. Anytime I wanted to link to something online in my notes, I would try to highlight words and Command+K ‘em to no avail. That left me to simply paste the link onto the page in all its http:// glory. Unacceptable! I actually did keep forgetting I wasn’t able to make hyperlinks in the app because that’s possible in all other software I use. And now it’s possible here too.

So there you have it!

Updates galore! I cetainly believe that OneNote is one of the greatest achievements of mankind to date (right after Pop-Tarts but definitely before the Wheel) and look forward to future versions of the Mac app.

Also, since I sent in those comments telling them to include at least two of the aforementioned updates, you’re welcome Internet.

What I’d like to see in the next update: