It was 9:50 in the evening on December 31st, 2013. I was on Le Calife, a dinner cruise boat that traveled the Siene River while passengers dined on luxurious meals and took in an atmosphere that only Paris at night can provide.

Being New Year’s Eve, Le Calife provided a very special menu tailored to the festivities, one of over six courses. There were even two extra portions, special sorbet-like dishes meant specifically to “cleanse the palate” before one of the main courses. I had never eaten a dinner this fancy in my life.

The day was full of a lot of firsts. I had never been to Paris, France before December 31st, 2013 either.

Out on the water, we passed other vivacious boats, and my friend Anna and I named them based on the activities and color of lights we spied through their windows: Party Boat, Raver Boat, Casual Boat, Formal Boat…everyone found their own unique way to bring in the new year.

I’m getting ahead of myself here, but I just want to mention that we - Anna, her cousin, his girlfriend, and I - boarded Le Calife at around 8pm. Dinner went until midnight, and the celebrations aboard lasted until 2am when we docked once more. As we walked back to our lodgings, it was obvious that celebrations in the city would last much longer.

Now, back to the story: It was 9:50 in the evening and we were finishing up one of our courses, one that must have involved finely spiced sauces and roasted vegtables and meat cooked to perfection. Le Calife, our new home on the water, had been gliding down the Siene, passing under bridge after bridge, when I spied the top of it from our glass-windowed roof. 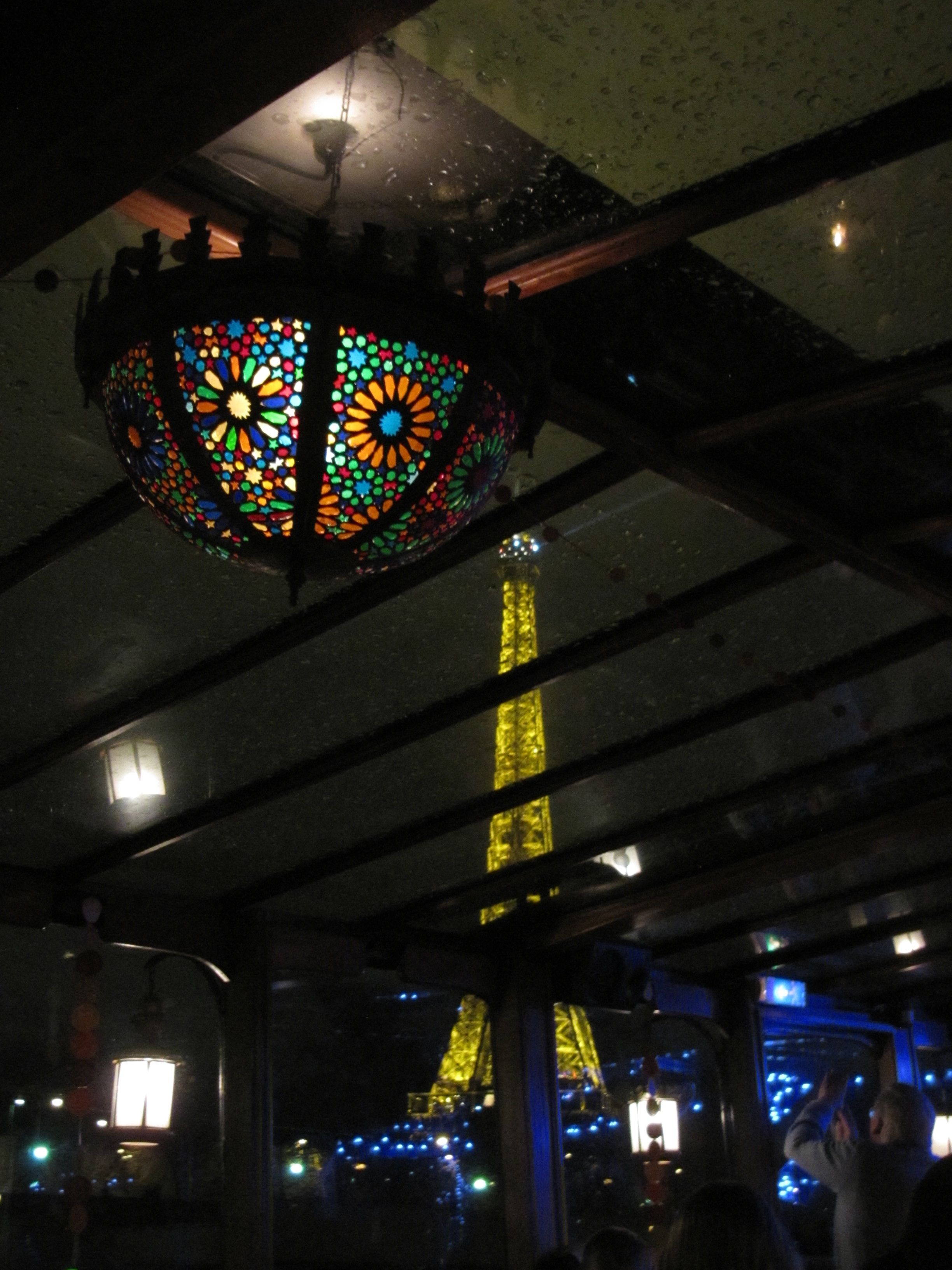 I had not seen it yet since arriving that afternoon in The City of Light, but I recognized its magestic presence. Anna and I couldn’t help but to squeal with excitement, while her cousin and his girlfriend - both from Belgium and both having visited Paris before - smiled at our merriment.

The clock struck 9:55. As the boat moved closer toward The Eiffel Tower on its journey down the Siene, Anna and I abandoned our dishes and took to the open upper level of the boat in order to view the monument in all its glory.

Even though the outside was freezing and damp from the earlier rain, we braved the staircase and found ourselves on the upper deck, cameras in hand and jackets around our shoulders. We snapped photos of each other and awashed ourselves in the tower’s golden glow.

Then the clock struck 10pm. 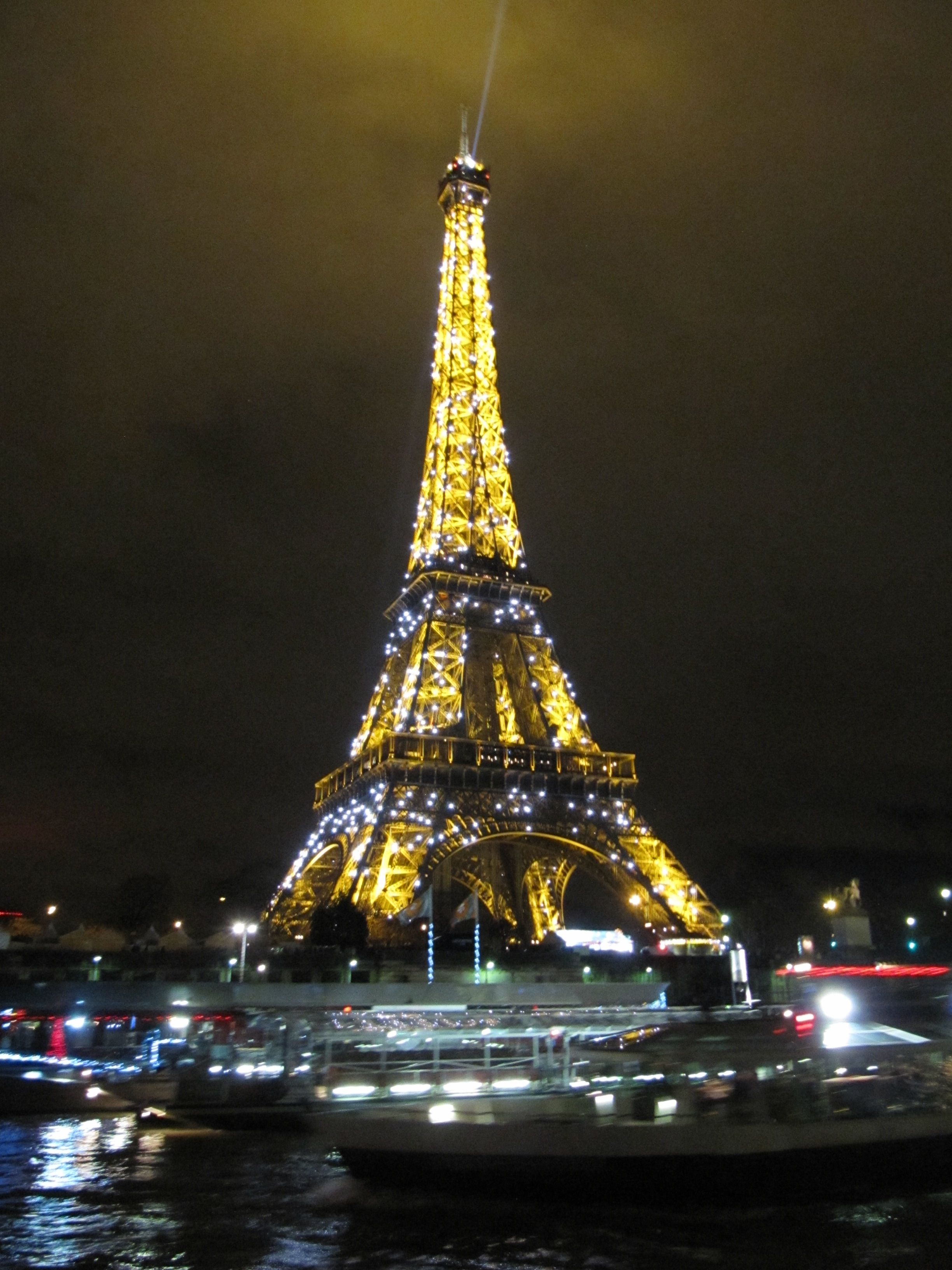 The whole tower lit up with dazzling, sparkling white lights which shone and blinked and demanded attention. I felt the reflection of the magic in my eyes, and I couldn’t contain the laughter that bubbled forth at the sight. We were in Paris, on New Year’s Eve, and the most famous icon of France glistened just for us, just for our arrival, to say hello. Anna and I squealed more as we heard cheers from the boats in the Siene all around us, as well as from others who joined us on the top deck. Everyone lived and breathed this moment together.

If you’ve ever had an instance where time slowed down and sped up all at once, you’ll understand what I felt when we passed under the Eiffel Tower.

It could not have been a more perfect surprise. We didn’t know at the time that after the sun sets, every hour, on the hour, The Eiffel Tower puts on a unique light show. We didn’t have to know. I didn’t even know that we were welcoming in 2014 with dinner on Le Calife that morning. We stood on the top deck as long as we could, basking in the chill and the lights, until we were called back down for yet another course of food.

The rest of the night continued to dazzle. We surprised Anna’s cousin’s girlfriend with a birthday cake presented by the crew (her birthday just so happens to share the date with New Year’s Eve), we counted down to midnight in English with some rambunctious Americans onboard, we toasted to a great 2014 as the waiters toured the boat with endless bottles of champagne, and we listened to an enthusiastic live band that got some of the older passengers up on their feet and dancing straight into the first day of the new year.

Out of everything, though, the lights of The Eiffel Tower are what shine on in my memory most of all.